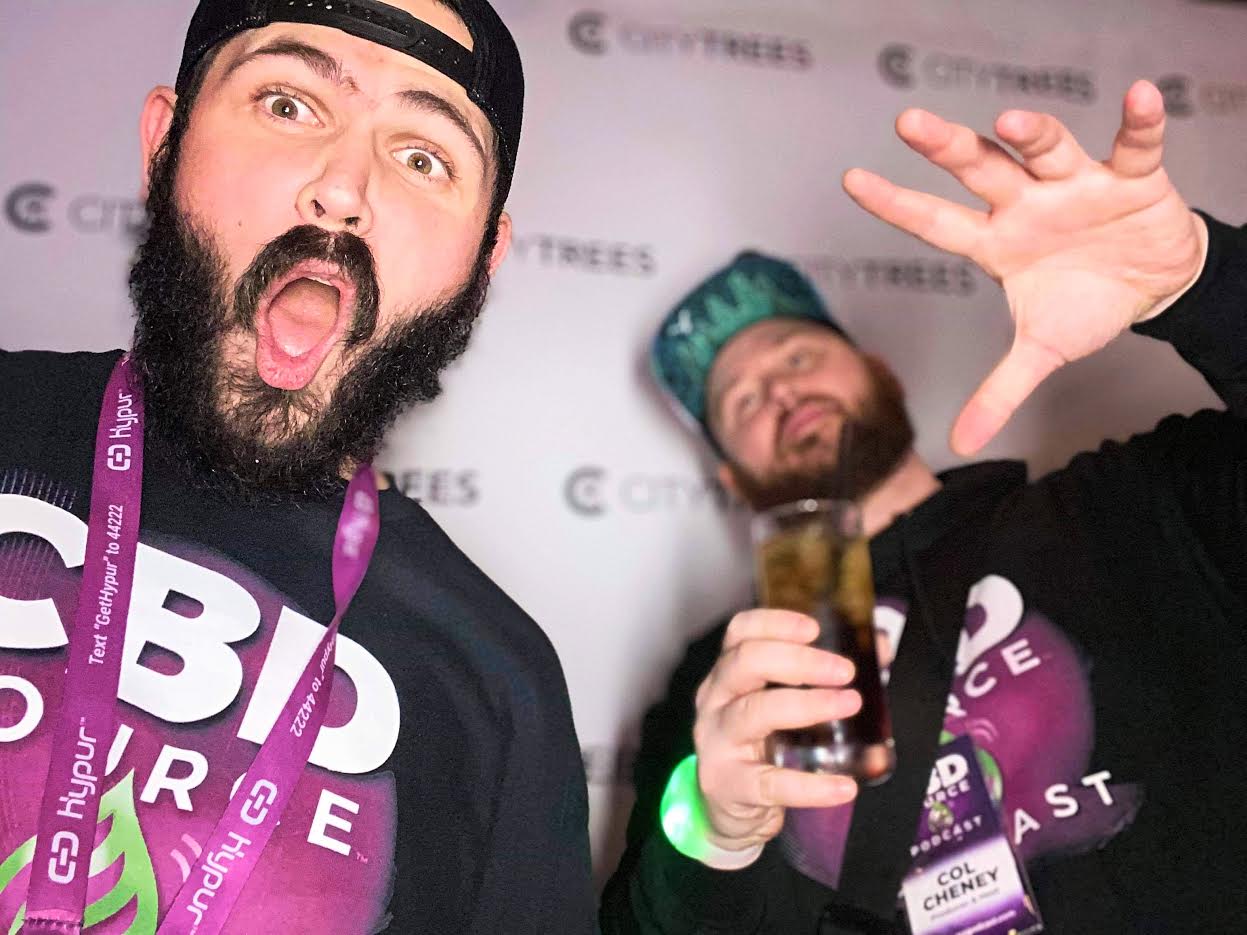 The New York based CBD Source Podcast was in Las Vegas from December 11th till the 13th, 2019 covering MJBizCon (the nation’s largest Cannabis & CBD industry convention).

Have already recorded interviews on day one and two with such industry luminaries as Tommy Chong and Steve DeAngelo, on Thursday night (Dec 11th – listen to future episodes of the CBD Source Podcast for those interviews), podcast host, Col Cheney, and the show’s the Cannabidiet chef, Ryan Webber were invited to the first annual MJBizDaily Awards Gala.

The Gala award presentation happened to be hosted by MontKush founder and OxiClean Pitchman Anthony Sullivan – whom the podcast had already interviewed back in November (Audio / Photos / Story here).

The gang didn’t dress formal attire as the invite had suggested…they wore their show clothes. When they were told that there was no video or audio recording allowed in the event or afterparty, they decided to document their adventures in another way…posing for the afterparty’s automatic photo booths in front of the step-and-repeat logo walls.

As you can see in the photo above, the room for this industry gala afterparty was insanely decadent. It was so massive, you could probably house over ten regulation basketball court side-by-side in there. The perfect venue to be networking, schmoozing, and conspiring with cannabis big wigs, and up-and-coming award winners.

“You really feel like you are a part of a tribe when you are at events where everyone attending is a fan of plant medicine, and everyone is actively communing with the plant in one way or another. We all felt tapped in. ”

They boys started off on a good foot, with only CBD in their systems, and a few trips to the various top shelf open bars in the cocktail space. They hatched a plan, a cannabinoid experiment. They began with classic, and semi-sober poses (SEE BELOW).

As the 90 minute alarm went off, the edibles were fully kicked in, and Col & Ryan hit up the photo booths again. Most of the booths were occupied with lines of people, so they went to one of the far off booths on the other side of the massive hall, and began to take pictures. Every time a picture was taken, it would show up on the screen and you had the option to print it, and have it emailed to you.

They did both…so we have perfect digital versions of their entire experience… Let’s follow their adventure in legal recreational adult use cannabis.

The photos get progressively more weird, fun, and diverse. Note that the guys were laughing their asses off in between each photo, but instantly as they hit send and print on the photo, they would be gearing up for the next photo. They monopolized a booth for half an hour, but the results are hilarious.

Thanks to Julie E for joining us in our phytocannabinoid, photo booth experiment, thank you to #MJBizCon2019 for hooking us up with the amazeballs ALL-ACCESS VIP Press Passes, and thanks again to Anthony Sullivan and Dave Christian for inviting us in the first place. This experiment was just one small part of an amazing week, that will not be forgotten…(and will make for some killer episodes!).