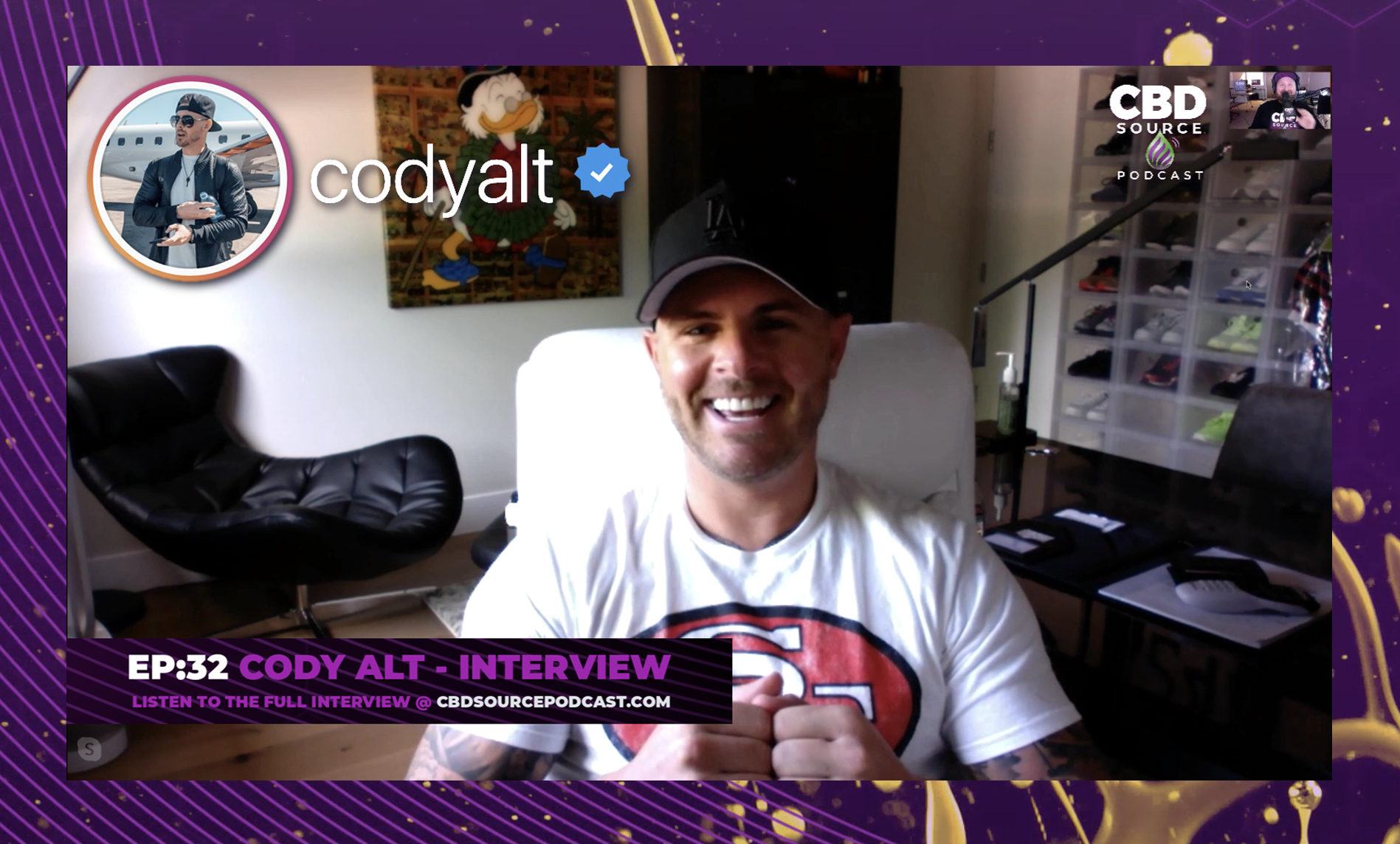 This week CBD Source Podcast host Col Cheney had the opportunity to interview Cody Alt! He’s a thought leader, cannabis influencer, entrepreneur, and founder of Kushly and PureKana CBD. But this wasn’t always the life he lived. Let’s go back, all the way back…

Cody talked to Col about his life during high school, college, and work after college. He had aspirations to be a professional NFL player. He was the quarterback for his high school football team and had several scholarships to play in college. Unfortunately, he along with some fellow players had their scholarships taken away after a senior class trip chaperone made a pour decision.

“When I was a senior, ya know, they take you on a senior trip, and it’s like a field trip. Well, they took us to a winery. The school board said no to it, but it was one of my chaperones anniversary and we ended up going to it anyways. And I tasted some wine, at the winery, because that’s normally what you do at a winery and I was 18. So I lost all of my scholarships to the bigger schools, all the invites to the all-star games, so it kind of screwed me in the end. It was actually national news. You can read about it if you Google it.” -Cody Alt

Check out this link here for the news article about the senior class trip fiasco.

In college, Cody had a t-shirt line called Elite Athlete, where he and his buddy would design athletic t-shirts and sell them for 2.5x the profit. Cody told Col:

“Back then I wasn’t as determined to make it work, it was sort of just like a hobby to me. So at that time, I was just doing it to do it. I didn’t really have an end goal in mind, ya know, I was in college. Like, if I made fifteen-hundred dollars profit I probably spent a thousand on Busch Lite 30 packs. I was just in a different place then than I am now.”

After he graduated college Cody went to North Dakota to work for a crude oil company on an oil rig. He worked over 12 hour days as a true blue-collar laborer. After about 6-7 months he realized the money involved. So he pitched an idea to his father, who is a logger, to quit and go work for the oil company in North Dakota reviving the land after the rig was out-of-service. His father and he then hauled the oil themselves all over the country for 6 and a half years. Cody said that he quit hauling around 2015, which was two years after he had started an Instagram account.

“I haven’t deleted anything, ya know, besides some ex-girlfriends photos. If you scroll down to the bottom of my Instagram you can see the semis. I know I have pictures of me getting pulled over in a semi for speeding. A lot of people delete their past photos and want to show their glamorous life, I’m not like that.”

Cody was not bluffing, we had to see for ourselves so we scrolled all the way back and found some pretty interesting photos! We found not one, not two, not three, but FOUR pictures of him getting pulled over!

After the oil rig job, Cody started his own meal prep company called Body Fuel. He started off cooking meals for some of his buddies who were in the NFL and worked his way up to cooking 3,200 meals a week! But it wasn’t always sunshine and rainbows. Cody shared with Col a story very similar to the one he told in an Instagram post back in 2017:

“I put my blood, sweat, and tears into this company to get it off the ground when I had nothing. I have other successful companies now but none of that would have ever been possible if I didn’t hit rock bottom and learn how to refocus my responsibility in life and hold myself accountable to not let it fail.”

It was during the time of owning Body Fuel that Cody was first introduced to CBD & THC. He shared with Col that he had a very good friend in the cannabis industry who recommended he take THC to help with his sleep apnea. After seeing how well it had worked for him, Cody decided he wanted to get into the cannabis industry. He founded Kushly, and spent a year and a half developing a program that would be like “Postmates for Cannabis.” He saw the need for a delivery system in the industry and ran with it. Though unfortunately, the demand for cannabis delivery was not great enough at that time. He converted the business to THC products and focused on quality and consistency. With legalities and policies and compliance, Cody said that he had a lot of trouble getting products to market. it was these struggles that pushed him more towards the CBD side.

Cody launched PureKana in July of 2017, which is his pure CBD brand. He provided us with a great box for our Unboxing segment of the show, which we talked about in this episode as well! We are actually giving away 3 PureKana CBD products, check our social media for the rules and details!

Cody shared that his daily routine consists of going to the gym twice and constantly taking his own brand of PureKana CBD to help with recovery.

“I take CBD religiously, ya know, before and after a workout, middle of the day. One of the benefits of CBD is it’s an anti-inflammatory, as hard as I am on my body it can’t hurt to take CBD.”

Cody told Col that he someday wants to retire knowing that he successfully built up these two brands to be the best they could be and help as many people as he can. He said that he wanted to be known as “The King of CBD”. His goal is to have people be able to see his products everywhere: Walgreens, Walmart, Whole Foods, etc.

Cody also shared with us his craziest Munchies Craving!

In this episode, we also did an Unboxing of PureKana products and announced a CBD product giveaway!

“Wow, I knew this would have some good stuff in it because it’s a hefty box. There are so many things in here. This is a really amazing kit you guys sent me, thank you so much.” -Col Cheney

Here’s how the prizes split up:

Click this button to listen to this episode to earn 5,000 Loyal~n~Save points. That’s $5 OFF your next in-store purchase at one of our CBD Source Center locations!!